The Scottish National Party’s (SNP) support for Scottish independence has been an example to criticise the idea of nationalism. Nationalism is said to promote war and obstruct liberty. Is that really so? 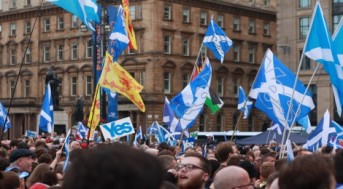 Nationalism is often viewed from one angle, which makes one defines nationalism as ‘a feeling of superiority over other countries’. That is only a narrow view of nationalism.

Nationalism had been on the rise in many countries before they overthrow the hegemony of their predecessors as shown by William Wallace in Scotland, Jose Rizal in the Philippines and Tunku Abdul Rahman in Malaya. This shows that nationalism isn’t only about ‘I am better than you’ but could also be about ‘You are not better than me’. Although both are trying to protect their dignity and pride, but their standards are different. The former believes they are worthy of honour and respect when they are superior than others, while the latter believes  they are worthy of honour or respect when they don’t have other people telling them what to do.

Nationalism is sometimes offensive and sometimes defensive. It would be really mistaken to conclude that nationalism is bad and it leads to wars and obstructs freedom. It’s like saying Hillary Clinton is a pervert just because her husband had committed many sexual misconducts. It’s stereotypical!

What we must also understand that such radical ideologies often emerge in the midst of despotic hegemony, or when people feel their dignity are threatened. According to Ibn Khaldun’s philosophy, this is a cycle of civilization, where people have strong asabiyyah (group feeling) at the beginning (or reconstruction) of a civilization, and asabiyyah begins to deteriorate when the civilization has been established. Asabiyyah is some sort of strong energetic feeling that leads to wars,struggle for independence and radical ideologies like nationalism. It is then proven to us that we should not occupy other nations, geologically or culturally, otherwise we are only making our own enemies.

The next time anyone says that nationalism is bad, evil, promotes wars, obstructs liberty, etc, just remember that is not always the case. In fact, nationalism usually emerges when there are people oppressing others. That means nationalism is often a chain reaction from other sort of evils.